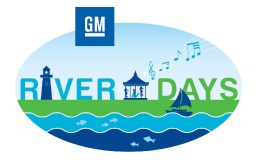 Since 2007, the Detroit River Days have been considered the unofficial kickoff to summer for many people living here in the Metro Detroit area. Last year alone, the event drew around 150,000 people to the shores along the Detroit River for three days of family-friendly fun, including music, activities, rides, and delicious food.

The Detroit RiverFront Conservancy began the Detroit River Days festival back in June of 2007 as a way to bring visitors to the newly transformed Detroit International Riverfront. Significant portions of the Detroit RiverWalk were newly opened, so the festival brought them to the public eye. Now in its eighth year, the GM River Days are coming up this weekend, June 19th through the 21st. The festival is held between Atwater Street and the Detroit RiverWalk from the GM Renaissance Center and the new Detroit/Wayne County Port Authority Terminal, to Rivard Plaza and the William G. Milliken State Park.

Activities and Events at this Year’s GM River Days

The title sponsor of the Detroit River Days is GM, with presenting sponsors being the Detroit RiverFront Conservancy and Soaring Eagle Casino and Resort. Other sponsors include Quicken Loans, the Michigan Lottery, Pepsi, etc.

There’s something for every member of the family to enjoy at this year’s Detroit River Days! Just to name a few of the events:

Some of the other great events and activities include zip lining, The Tuskeegee Air Show, various activities at Milliken State Park, buskers and street performers along the RiverWalk, a Kids Stage, and so much more! Grab the kids, and even your furry friend (leashed canines allowed!) and head down to the Detroit River Days this weekend. Get there between 11 a..m. and 5 p.m. on Friday the 19th for free admission that will last throughout the entire evening! You won’t want to miss this awesome event!